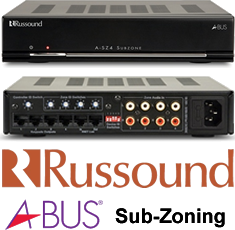 Remember the sub-zone feature on the CAV6.6?  Now it is back for the MCA-C5 and C3 and it is better than ever!  When planning a Russound MCA-C5 system you have 6 amplified zones and 2 sets of pre-amp outputs for a total of 8 zones.  While that is sufficient for most homes, what do you do when you have 9 zones?  Until now, the answer was to make do with 8 zones, or purchase another MCA-C5.  Now with the A-SZ4 you can fill in extra zones without sacrificing the Russound experience.

To help understand A-BUS sub-zoning let’s take a look at a common system design.  The customer is looking for speakers in the master bedroom, a single point stereo speaker in the master bathroom, and a set of speakers on the lanai or in a sitting room.  If this was done with the MCA-C5 main zones, half of the amplifiers would be used and you would not even be out of the master bedroom.  The new solution; use the A-SZ4 Sub-Zoning Module.

The A-BUS sub-zoning module allows a dealer to expand the number of audio zones by using A-BUS technology.    Each keypad is addressed to be source linked to a primary zone on the MCA-C5 or C3.   The keypad remains independent for power and volume; however, it always plays the same source as the primary zone.  In addition, the A-BUS keypad has the ability to change the source by tapping the source button.  The LCD is automatically programmed to display the source module name to match the source programmed into the MCA-C5.  The sub-zones even respond to all on/off commands.  There is no programming necessary, just simple configuration using code wheels and dip switches.

Let’s return to the example from above.  Instead of purchasing another MCA-C5, the dealer could purchase an A-SZ4 and two A-K5L A-BUS keypads for around 30% of the cost of just an MCA-C5 controller.  Best of all, the customer would have full system control in the master bedroom as well as the ability to listen to the selected source in the bathroom, and on the lanai or sitting room.  There would be 5 amplified and 2 pre-amp zones left on the MCA-C5 controller cover the rest of the home.  This same concept can be applied to many other rooms such as kid’s bedrooms (don’t forget the A-BUS local source module for MP3 players!), dining rooms, basement, workshop, guest bedrooms, or the garage.  A great strategy is to choose the 8 primary and use the 2 gang keypads.  For the remaining zones, fill in with the A-BUS sub zone module and keypads.  This will provide audio in less important rooms without dramatically raising the cost.  Don’t forget you can still control the sources from an iPhone or iPad via the Russound app and the HAI iOS app.

The A-SZ4 Sub-Zoning Module is a half width A-BUS multi-zone hub with RNET communication.  For rack mount applications it can be mounted with the included kit or it can be mounted next to any other Russound half width module like the new RDS tuner or D250-LS 50 watt/ch amplifier.  No additional mounting parts are required, everything is included.  On the back of the A-SZ4 is a pair of RNET link jacks, four A-BUS ports, 4 pairs of audio in jacks, a power connector, a set of dip switches and 5 code wheels.  Each A-BUS port is individually addressable allowing multiple keypads to follow a single zone or for each keypad to be assigned to a different zone.  The only small restriction is all four keypads must follow a zone from the same MCA controller.  Up to four A-SZ4’s can be installed in a system.  Wiring to each A-BUS keypad is only a Cat 5 from the A-SZ4 module to the keypad and then speaker wire to the speakers from the A-BUS keypad.

When planning your next large MCA system, keep the A-SZ4 in mind.  While having multiple controllers and full system control in each zone is nice when the budget allows, it is sometimes overkill.  The use of A-BUS sub-zoning is often an outstanding way to keep costs down while still providing a full feature system with a great end user experience.

July 27, 2012 update:  The A-BUS Sub-Zone has been selling well.  We have learned an important detail.   The module can work with any of the MCA-C5 zones.  When using an MCA-C3, the module can only be connected to zones 1 and 2 because only these two zones have a fixed line out option.  Zones 3 and 4 would communicate; however, the variable level output will effect the A-BUS audio level leading to an inconsistant end user experience.

Recently we have had several calls from dealers that were asked to work on an Aegis or OnQ HMS controller.  These boards were manufactured by HAI and the boards look the same as HAI boards.  The key difference is the firmware.  Since the release of  3.0 firmware, HAI has made it a simple task to convert 2.x firmware boards with a simple firmware update.  Worthington Distribution recommends starting a file from scratch when upgrading from a firmware revision prior to 3.0.  Earlier board’s firmware cannot be updated beyond 1.9.

All OEM variants of Aegis and OnQ controllers (except Model 2503) can be converted to the HAI equivalent.  Those models are:

Firmware chips can be purchased through Worthington Distribution (800-282-884).  HAI PC Access 1105w will be required for programming. 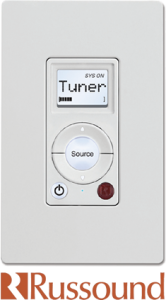 The iPhone, iPad and Android have changed the way customers interface with their systems. For many, the flexibility and complete system control found in the MDK-C5 two-gang keypad, or the graphical, intuitive, touch screen interface found in the TS-3 are the best choice.  For others, all they need is power, volume, and source selection; the primary interface becomes a portable device.

Russound has addressed this new approach with the introduction of the SKL keypad for the MCA-C3 and C5.  It wires the same as the MDK-C5 over a single Cat-5.  The interface is simpler offering an LCD display, volume, source selection, power and an IR receiver.  This single-gang solution provides the basic functions allowing the enhanced user experience to reside on the customer’s high-tech devices.  The SLK keypad is now shipping, please call for dealer pricing 800-282-8864.

The 2GIG CT-100 Z-Wave Thermostat is now shipping and in stock. Our testing and response from the street is that the CT-100 is an outstanding replacement for the CT-30.

When you open the CT-100, the first thing that you will notice is that it is considerably thinner then the CT-30. Simply put, it is more attractive. In addition to better cosmetics there is also now room for 4 AA batteries. The new higher battery capacity combined with a new Z-Wave polling structure found in 1.9 firmware is expected to extend battery life to an estimated 1.5 to 2 years.

Installation has been made easier with greatly enhanced Z-Wave communication distances. In addition, nearly all HVAC systems are supported up to 4 stages. Because the CT-100 runs on batteries, a common connection is not required.

What remains in the CT-100 from the CT-30 is an easy to use touch screen interface. Now instead of heat and cool only, the CT-100 adds an auto changeover mode. This is a great enhancement that allows customers to enter their desired temperatures year round instead of having to make changes for heating and cooling seasons.